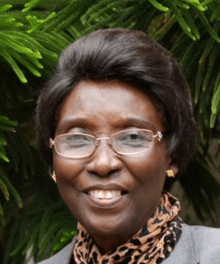 Grace Ebun Delano is a seasoned Administrator, Nurse/Midwife and Reproductive Health Advocate with over five decades of active working experience.  She has risen steadily from the post of Theater Staff Nurse in charge of a Theater in the United Kingdom in 1959 to the position of a Vice President/Executive Director of a leading Non-governmental Organization that she co-founded, the Association for Reproductive and Family Health (ARFH), Ibadan, Oyo State, Nigeria where she gracefully retired in November, 2015.

A paragon of an empowered woman, Grace Ebun Delano has consistently demonstrated a high level of intellectual and technical soundness in her field of work, and a classical thoroughness in the performance of her duties.

Grace Ebun Delano’s commitment and dedication to duties as a Midwife in the Department of Obstetrics and Gynaecology, University College Hospital, Ibadan between 1962 and 1970 inspired Professor O. A. Ojo, the first Nigerian Head of Department to invite her to team up with him in the Population Programme of the College of Medicine to set up the first integrated Family Planning Clinic into the department of Obstetrics and Gynaecology in university college hospital, which later metamorphosed to the present Fertility Research Unit of the College of Medicine, University College Hospital, Ibadan and became the model for the integration of family planning into the departments of Obstetrics and Gyneacology in the tertiary institutions nationwide.

Her pioneering work in Family Planning Training, Research and Service Delivery at UCH, Ibadan has earned her innumerable commendations locally and internationally as a Trainer, Administrator, Service Provider, Coach and Social Reformer.  Grace Delano, who has become an institution herself on any matter related to Reproductive Health, Family Planning and Population Studies in Africa, particularly in Nigeria, is an outstanding visionary whose creativity, dynamism and innovative community work is a pride to womanhood and indeed mankind.

Grace Delano’s exemplary advocacy role for women’s emancipation is reflected in her enormous drive to provide integrated reproductive health services, adult literacy, income generating ventures for many rural communities as well as effective sensitization of governmental and non-governmental organizations to the need for collaboration and coherence in their social reform activities.  She has assisted and strengthened over 120 non-governmental organizations in Nigeria spread across the States of Nigeria to initiate community-based services to disadvantaged areas.

Intellectually vibrant, professionally and administratively resourceful, Grace Ebun Delano has attended more than 120 national and international conferences and workshops, and has presented no fewer than 98 scholastic papers.  She is a sole author of 16 books and co-author of over 14 others.  The first Family Planning textbook to be ever produced in Nigeria for clinical services in English and Family Planning textbooks in the three major Nigerian languages (Yoruba, Ibo and Hausa) was solely authored by her.  She also co-authored a handbook for Voluntary Health Workers in English, Yoruba and Hausa languages, aimed at improving knowledge and enhancing performance to reduce maternal and infant mortality and morbidity rate in the country.

It is noteworthy to mention that Late Professor Olukoye Ransome-Kuti was highly impressed with Grace Delano’s dedication, commitment, interest and sagacity that she conferred on her the title “Mother of Primary Health Care” at a national workshop on community-based delivery held in Jos.

“Sweet 16”, as she is fondly called by friends and colleagues, is held in high esteem by her colleagues locally and internationally for her high sense of probity and accountability.  Her sterling qualities, which are worthy of emulation have earned her national and international recognition with honours and awards.  Some of these are:

1982      Included in the world “Who is Who” of Women [6th edition] published by International Biographical Centre, Cambridge, England.

1991:     Honoured by the Alake of Abeokuta and the community with a chieftaincy title: “Ekerin Iyalode of Ake” for her contributions to the development of Ogun State.

1993:     Honoured with a Merit Award bythe National Association of Nigerian Nurses and Midwives, for contributing to health care development and for promoting the profession in Nigeria.

1997:     Honoured by the Centre for Development and Population Activities [CEDPA] as a Distinguished CEDPA Alumni [DCA] 1997 of this international institution for her ability to translate her numerous training to the benefit of women, children and adolescents.

1997:     Honoured by the Nursing and Midwifery Council of Nigeria with “Florence Nightingale Award” in recognition of her achievements in elevating the status of the nurse/midwives in other fields of endeavour other than nursing.

2000:     Honoured with the Pathfinder Millennium Award by Pathfinder International in recognition of her contribution to Pathfinder’s success in improving the quality of life of the under privileged and its programming in Nigeria.

2003:     Honoured by Society of Obstetrics and Gynecologists [SOGON] as Honourary Member of SOGON.

2005      Honored by the Civil Society for HIV/AIDS in Nigeria ,Oyo State chapter in recognition of her pioneering role in the formation of CISHAN in Nigeria and in Oyo State

2006      Honored by Pathfinder International Nigeria with the “40th Anniversary Certificate of Merit” in recognition of her outstanding contribution and commitment to Pathfinder programs in Nigeria.

2006      Honored with “Outstanding Contributions to Health Care Service” by the Federation of Female Nurses and Midwives of Nigeria [FENAM] in recognition of her contributions towards making this society a better place to live in.

2006      Honored with “Rare Gems 2006 Award” in recognition of her contribution towards health and disease control and in commemoration of International Women’s Day 2006 by the Women’s Optimum Development Foundation [WODEF].

2007      Honored as the Celebrity of the Year 2007 by the Oyo State Agency for Youth Development for her contributions to youth development.

2007      Honored with Award of Recognition by the Civil Society on HIV/AIDS in Nigerian in recognition of her work in the area of NGO Development and Mentoring.

2007      Honored with the International Youth Award of Excellence by the National Youth Council of Nigeria, Oyo State Chapter for her immense contributions and unrelenting efforts in all spheres of societal development.

2009      Honored with the Virtuous Wife and Mothers’ Award by the Inner Wheel Club of Oshogbo, District 913 in recognition of her commendable roles which she has continued to play as one of the molders and builders of model homes in the Nigerian Society, especially the supportive role astutely played.

2009      Honored by the Fellows of the WACN, Oyo State Chapter, in recognition of her dynamic contributions to the growth of nursing profession, the West African College of Nursing and Humanity in general.

2010      Honored by the Civil Society for HIV & AIDS in Nigeria, Lagos Chapter for her enormous contributions towards the development of NGOs in Nigeria.

2010      Honored by the Institute of Humanitarian Studies and Social Development with a Fellowship Degree of the institute for her immense contributions towards the humanitarian services and social development.

2013      Honored by Oyo State Officials’ Wives Association (Oyo State Government) with Girl-Child Advocacy Award for my tremendous contribution to the well-being and education of the Girl-child in Oyo State.

2013     Honoured by the Midwifery Students’ Association, University College Hospital, Ibadan for her contributions to Reproductive Health and development of girl-child in Oyo State and Nigeria.

She has contributed immensely to the national development of the country in many ways.  She belongs to a good number of notable social and philanthropic clubs and societies in which she holds important posts such as Adviser, Matron, Vice President or President. Grace Ebun Delano is happily married to retired Chief Judge of Ogun State, late Hon. Justice Isaac Babatunde Delano and the union is blessed with children and grandchildren.

Back To All Management Staff